New South Wales (NSW) is one of the most visited regions in Australia. This isn’t surprising as the region has some of the most picturesque sceneries, stunning places, iconic landmarks, and lively tourist attractions in the country.

But there is more to NSW than the popular tourist destinations. If you’re into enjoying the off-the-beaten-paths, then this post is for you. Here’s a quick rundown of the most beautiful hidden places in the region.

Angel Place
Tucked in the quiet alleyway off of George Street is an Instagram-worthy art installation complete with whimsical quality. Above the alley are hanging mismatched birdcages. Visitors who look up to admire the display will be treated to a beautiful sound of birdsong softly drifting across the alley. The cages represent the 50 species of birds that once inhabited the city, but were forced out by the European settlers.

The art installation was originally a temporary exhibit, but as more and more people flocked to the alleyway to see and snap photos of the “Forgotten Songs”, they made it a permanent fixture.

Bronte Baths
If you’re visiting Sydney during the summer, then you should know it can be really hot. Luckily for you, the city offers many ways for you to cool down. One of which is the public swimming pool Bronte Baths at Bronte Beach.

Bronte is one of the city’s best beaches. But unlike the more popularly-known Bondi beach, Bronte is tucked away and hidden from the crowds. It’s like a local secret spot.

Located near the south end of the beach, the Bronte Bath is actually an ocean pool open to the public year-round. Once you’re done freshening up, you can enjoy the beautiful scenery on the Bondi to Bronte coastal walk.

The GPO Building
general post office building
Sydney’s General Post Office (GPO) building is a stunning example of classic sandstone architecture. Located at the corner of Martin Place and George St., this building is one of the city’s oldest and most treasured landmarks.

Built in the 1860s, the GPO’s façade was originally constructed from locally mined stone. Inside, however, is a whole new treat for tourists, as it houses a food court of classy restaurants with a grand light-filled atrium and bars. There is also an exhibition space for the original Tank Stream, the primary source of water for the Penal Colony of NSW, shortly after the arrival of the first fleet in January 1788 under Arthur Philip, the region’s First Governor.

Spice Alley
You can’t run out of delicious and mouthwatering food to sample in the city. But if you’re a serious foodie, then you should definitely check out the Spice Alley. The Spice Alley is a narrow laneway that stretches off of Kensington St. in Chippendale and it’s widely considered as the most exciting foodie destination in the city.

The Spice Alley is, as its name suggests, an alley. It’s a street filled with hawker-style eateries that serves a wide variety of Asian dishes. Visitors can treat their palates with Singaporean dishes, Hong Kong cuisine, and more. The seating, of course, is what you’d expect from traditional hawkers – open-air courtyard. You can pick any seat after choosing your dishes. The best thing about this place is you can bring your own bottle of wine.

Pylon Lookout
Most Sydney visitors will hear about the famous BridgeClimb, but there’s actually a cheaper and less expensive way to get to the elevated view from the Sydney Harbour Bridge – the Pylon Lookout.

Located near the southeast corner of the bridge, this attraction is accessible from the pedestrian walkway. Inside is a small museum dedicated to the structure’s construction and history, and of course, an observation deck that offers a stunning view of the city.

Tramsheds
tramsheds sydney
Speaking of foodie destinations, there’s another hip location that the residents of Sydney love to frequent to – the Tramsheds. This place combines old with new; a historic space that offers modern experiences. There’s actually a vintage tram on display.

Located in the leafy suburb of Glebe, the Tramsheds is actually an old tram depot transformed into a modern foodie destination. It houses cafes and restaurants that feature local produce and culinary delights, all under a fresh and lively atmosphere.

Observatory Hill
There are multiple ways to enjoy the beautiful sight of the Sydney Harbour. One of the best ways is with the Observatory Hill. This small hill is just 10 minute walk away from Circular Quay. Despite its small size, it houses a stunning vista that few people know about.

There’s also a treat for astronomy enthusiasts – the Sydney Observatory, which sits atop of the hill. This historic observatory is a free-of-charge museum with night and day tours. Night tour guests may get the chance to see the stars through the telescope, weather permitting, of course. 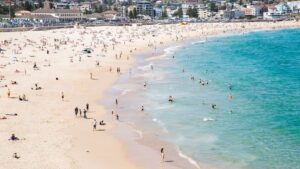 Bondi Beach is one of the iconic tourist attractions in Australia, particularly in New South Wales. This attraction draws up to 2.6

Best Things to Do In Sydney

Sydney is known for many things; it’s the biggest and oldest city in Australia, has stunning harbours, iconic landmarks, enviable climate, spectacular

Its combination of beaches, parks and spectacular views make this walk unique. It started out as a state project during the 1930s,